There is an endless list of things I want to do before I die and this week I didn’t cross any of them off, but I did do some things I’ve never done before. Nothing too big, well within my means. African safaris just aren’t in my budget right now. In the past week I’ve tried Tai Chi, knitted a hat, and baked homemade cinnamon raisin bread.

Tai Chi. I vaguely knew anything about it before I started. It looked like martial arts in slow motion. Which is pretty close to accurate. My club offers a Tai Chi class… well technically the yoga instructor provides the service for free and Tai Chi lovers donate what they can. When I showed up to class it was just me and the instructor. Uh oh. Luckily one more person showed up. I guess Redding hasn’t caught on to the new trend. We were in a studio surrounded by mirrors so I could easily see how ridiculous I looked. The slowness pf the motion martial arts was a different kind of challenge. I wasn’t breathing heavy or sweating. The hardest part was slowing my body down along with my mind. I realized the faster you do something the less aware you are of your body. It took a while before I stopped trying to guess the next move. The instructor said I was doing pretty well and that she could tell I used to dance… I might have mentioned I used the same room to practice for my dance recital, but I have no dance experience other than 2 college classes. I tried to be flattered, but at the same time I realized the only other participant was a 60 year old… she was great at moving slow. I’m not sure how I feel about this, but I’m willing to give it another try. If you are looking to sweat physically then this might not be for you, but if you want a brain sweat then definitely give it a try. We could all use some help slowing down or brains. Well maybe not all of us.
Knit hat. Wow that was easy. So easy it doesn’t even feel like much of an accomplishment. All you need is some yarn and a loom. Loop, pull through, and repeat. I’ve already showed 3 people how to do it. Sorry if you are in the hat making business. Even though this didn’t take quite the effort I expected it does feel great to wear something you made. “Oh you like my hat? Ya I made it myself. It was grueling work, but worth it.” 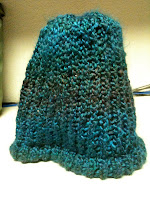 Raisin bread. Nom Nom. I just had a leftover piece for breakfast and it was still delicious. I got the recipe from a bread making class I went to. All the recipes we went over in class were supposed to be easy. What is so hard about mixing ingredients together? The hard part is waiting for the rise and fall of the dough. For once I planned ahead and made the dough the night before. It was a good thing to because once you roll the bread up with all the ingredients it still takes another hour and forty minutes to rise in the pan before you bake it. Then 35 minutes to bake. So around 1pm I hate my delicious breakfast. I’ve seriously never had such soft moist raisin bread. 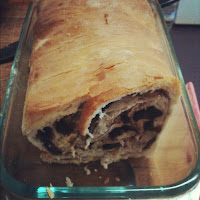 I’m sure you are starting to wonder how I have all this free time. Well I work nights. Also, everything I’ve done was free. Relatively free. I still have to pay for a gym membership to do the class. My mom bought the yarn and loom. Oh and raisin bread ingredients were about $8. Well its still cheaper than sky diving. Yes that’s on my bucket list. There isn’t a lot I’m not willing to try at least once. So while bakin, makin, and exercisin aren’t life changing experiences they do enhance each day.

I know what you are thinking… “could this girl be anymore well rounded?”