I’m sorry what did you say? Did my vagina stutter?  I’ve heard of vagina monologues, but never really knew what it was all about. I didn’t plan on ever going to one either. Well till my boyfriend asked if I wanted to go to one coming to town. Shocking I know. Well he was going to get extra credit in his sociology class for it. He even invited my mom and sister. So the four of us went. to go hear what vaginas have to say.

I was totally surprised. It was hilarious. I don’t even think I can do it justice. I’ll just talk about my favorite talking vagina. It was dressed in leathers, held a whip, and was 60 years old. The monologue was about an accountant who became a professional woman pleaser. Like a lesbian gigolo. She talked about how she was an extremely load moaner. The men she was with thought she was weird and too eccentric. She later realized that she loved her loud boisterous moan and loved helping other women achieve their moan. Then she went on to describe all the other types of moan. It was hilarious. I won’t even try to describe them all I’ll just list a few. There was the catholic moan, breathy, dog panter, jewish, student, masculine, ect. I don’t even remember them all. The best part was watching this 60 year old woman play each one out with so much passion and without reserve.

The whole show wasn’t all quirky hilarious monologues. A little less than half was stories about women who have endured injustice and were sexually tortured. Some of those monologues were extremely hard to listen to. I can’t imagine going through the torment that some women have endured from rape, sexual violence, genital mutilation, and sex slavery. I’ve also learned that 1 billion women have been victims of these crimes. 1 billion. What kind of world do we live in where this is acceptable?

Luckily, there are causes like this to give these women a voice and to come together to fight injustice. I’m so glad I got to be apart of it. There were a few awkward times sitting between my boyfriend and my mom and sister during some of the scenes, but I think it would be weirder if it wasn’t. After going I definitely feel empowered. I feel like women have a hard time talking about their bodies, me included. Plenty of men brag about their junk. It’s mentioned in most rap songs. So why should women never talk about or be proud of their VaJJs? From now on I will not be shy or embarrassed about couchy snorcher.

If you want to be apart of this here is a link to become involved. VDAY 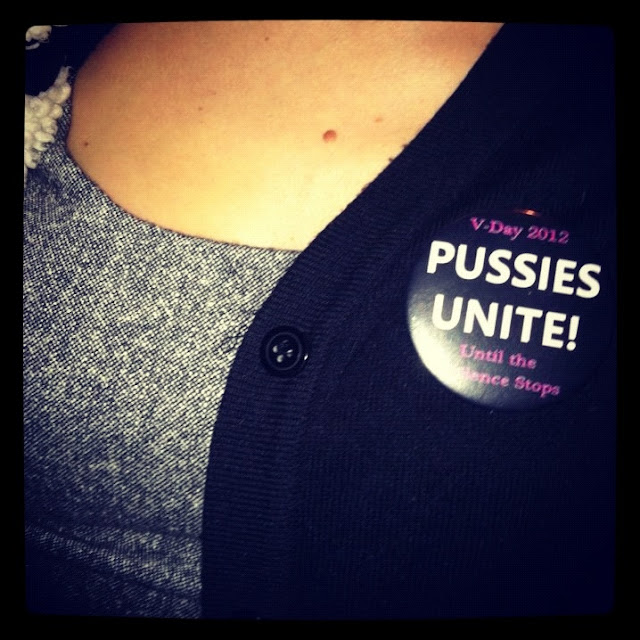