Since I was 11 and till I’m 55 I’ll never be a double odd number again. I’ll always be doubly odd, but that can’t be measured in numbers.

As you might already know, I love themes. I love dressing up. As my grandma would always say, “Variety is the spice of life.” She was a housewife in the 1950s that made the same meal every time I came to visit. Same church for 30 years. Same husband for 60 years. I don’t know what spice she was talking about. Secret lovers? Rest in peace, you foxy lady.

When I was brainstorming with my gentlemen for a theme he said mentioned my favorite song: Caribbean Queen! Fun fact: When I mentioned this to my dad he told me that Caribbean Queen was playing of the radio on the drive home from the hospital after I was born. My dad then offered to make me a Caribbean playlist for my party. He didn’t want to send it to me too early in case I tried to edit his song choice. He knows me so well. There’s one song that he threw in that is a inside joke. Explaining the joke would take too long, but if you get to a song that doesn’t sound quite Caribbean know that we are laughing. At you.

The inside joke. Get it? Didn’t think so.

Next was to create the menu. I have a tendency to make everything hard work. If you have an easy task I’ll add 5 more things onto it. You want an easy hike? How bout a 6 hour climb. Want a relaxing vacation? Let’s get scuba certified first and take 4am flights to jam pack our days. You can rest when you’re dead! As for my themed dinner parties I would prep too many dishes and they all would be something I’ve never made with 20 ingredients each dish.

So this theme would relaxing… and spicy.  Oh you didn’t know that some places in the Caribbean had spicy food? Me either. First thing on the menu was Jamaican Jerk Chicken. I don’t work a lot with jalapeños, but I realized you should never scrape out the seeds with your fingernails. It was quite a painful learning experience. Fuck the spices of life. Next on the menu was Pernil. It is a Puerto Rican pork recipe a tennis client sent me. No spice. This was so easy to make and everyone’s favorite dish.

Almost everything else was just as simple. 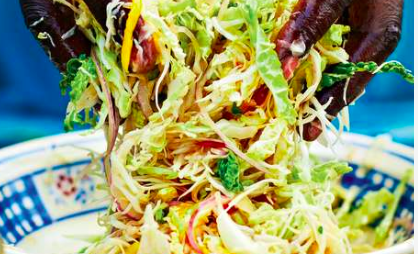 Caribbean-Style Corn On The Cob

The hardiest dish was the Tostones: Just taking the peel off these defiant bananas was a chore. Then frying them twice got this dish on the “never again” list.

So once the menu was set. I could focus on… oh wait.. nothing. My job was over. I prepped everything the night before, but the Tostones. I got decor at Target. So simple.

Convo between my s.o. ([significant other] because I’m too old and hip to say boyfriend) and I just 2 hours before the party starts.

Me: Look at how easy I made this, right lover?

Lover aka su chef aka bar tender: …. is everything ready?

Me: No. But so much easier than before. Right? I think we’ll have time to relax for the last hour.

Me: I need help cutting up the bananas. I don’t have cups! Where are you going?

Lover: To the store to pick up cups.

How did this happen?

Right at 6:30 everything was ready.

In-between 6:30-7:30pm I cry because I worked so hard and I have no friends. (Period started the next day)

Well I calmed down. All on my own accord. Alcohol had nothing to do with it.

Right at 7:30pm the first person shows up.

I know you were all worried that I don’t have any friends. Well this is proof that I do. Female friends no less. Proof. 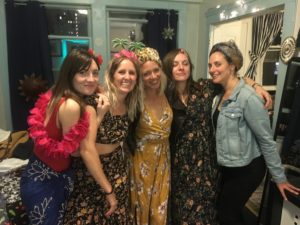 Even though 2 of the girls were the girlfriends of my boyfriend’s friends and one was a friend’s friend. But still. Wait?! Were all my guests Damon’s friends? Or Damon’s friends’ friends? Oh well. They dressed up and complimented my food. What else could a girl ask for in a dinner party? Dress up and tell me I’m a great chef. Why else do I have these? All I know is that I’m a part time chef and these parties are now tax-deductions. You can buy my “How to stress out and cook dinner for people you don’t know” book on Amazon.

Coming soon,  (How to stress out planning your boyfriend’s birthday party) 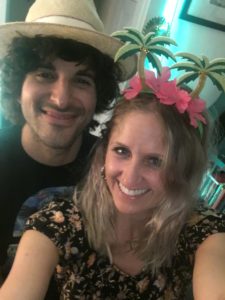