My best friend was getting married near Niagara Falls in August and I was a bridesmaid. With the “Bachelorette party” under my belt I was getting ready for another.

Boston is the only city I’ve been to on the East coast and since I was gonna make the trip across the U.S. I figured I’d make the most of it. This of course means… New York!!! First off, Gabe would accompany me as my date for the wedding. This would be his second flight ever. Now my mom and sis had never been to New York either so when I told them I was going, naturally they invited themselves. Now there was 5. My sister’s husband would also be joining us, but my dad wanted to stay home. He hates flying and big cities and everything touristy. We all decided a week in New York would be all we could get away with. Then afterwards, Gabe and I would fly over to Buffalo for the wedding. Now 3 months before our trip I started making an itinerary. I couldn’t believe we were finally going to New York and I wanted to make sure to do as much as possible. If you’ve read my last post you know how I like to travel. If you don’t pack running shoes when you travel then you shouldn’t travel with me.

While planning the trip I would ask for recommendations from anyone I met that said they were from New York. When people overlapped recommendations I would star it in my itinerary. I’m not joking about that. I’ll post it at the end. Now there was a bit of a debacle about 2 months before our trip. Exactly one day after Gabe and I bought our tickets my sis decided that her and her husband weren’t going. My mom had a meltdown about it, but I assured her that there was no way my sister would miss a trip to New York. I think she just likes to stress out my mom or maybe it’s a tactic to get my mom to pay for shit. Drama, drama, drama. A week later we are back on track and yes my mom paid for it.

By the time we were ready to pack our bags the itinerary was set. We flew in the Thursday evening at 10pm and struggled our way through the New York metro. Which is much more elaborate, convenient, and cheaper than San Francisco’s system. By the time we got to our Air B&B in Harlem it was 1:30am and the rest of the family was resting from their first day in the city. Somehow they got earlier tickets arriving and later tickets leaving. Not jealous. 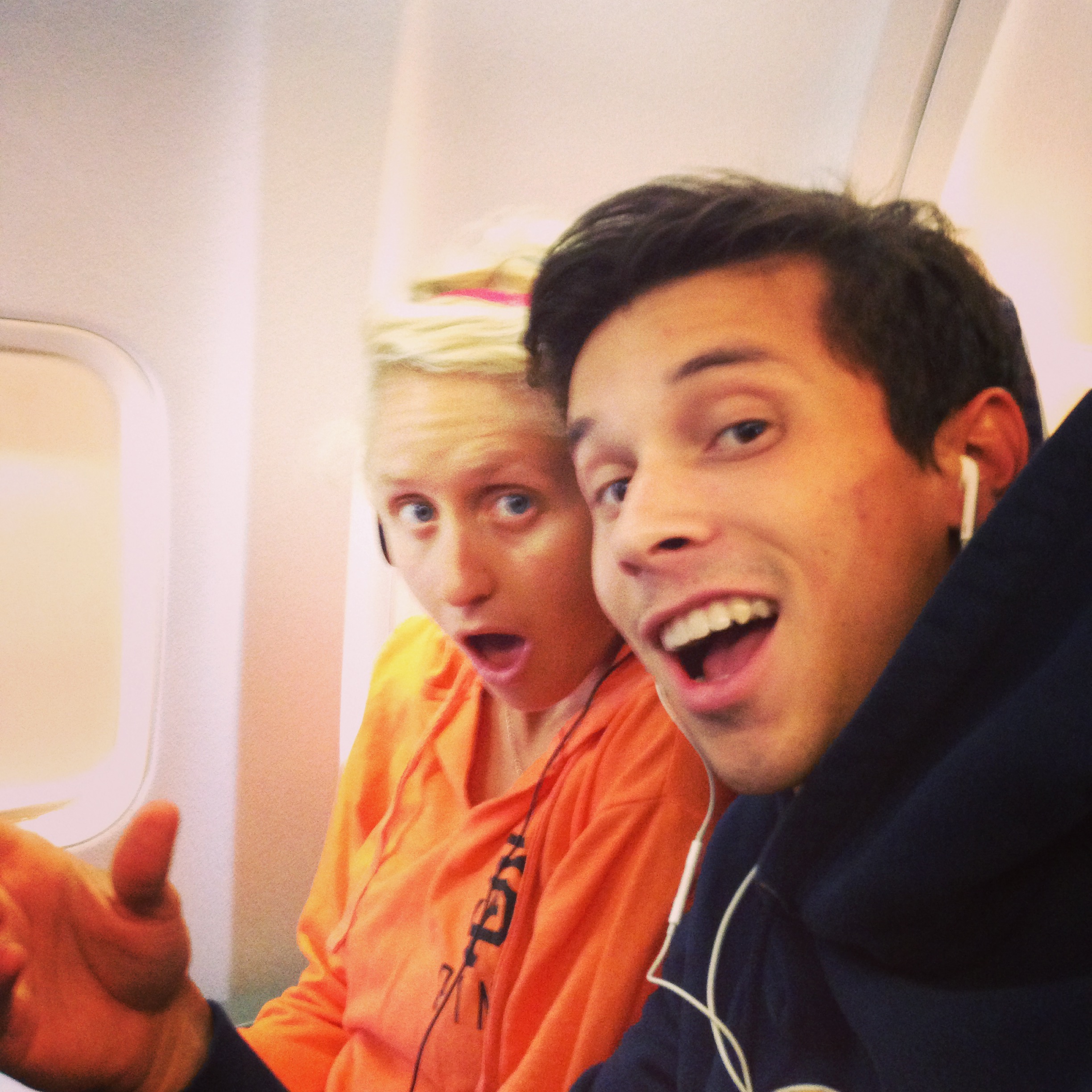 Since we all would be a little jet lagged we decided not to rush the first morning. Well they decided. We had booked a river cruise at 11am so we couldn’t linger too long. On our way to the cruise we walked through Times Square. It’s just like you see in the movies. We were such a giddy, starstruck bunch, like all the other tourists crowding the street. We all know what song was on repeat in our heads…. “Move Bitch Get Out The Way”… only kidding… kinda.

Now I recommend doing tours on the first day of a trip in order to get the feel of a new city. While on our cruise, we got a relaxing tour of the city, our guide was such a doofas. Major doofas and I don’t use that word lightly. His historical facts weren’t funny or interesting, “Over here is where someone not very famous or important lives. And over here is where I eat lunch by myself. If you haven’t noticed New York is quite a big city where anyone can feel small and unimportant. At nighttime they turn the lights on.” Now this would be considered clever based on what he said, but he was so bland that my mind can’t even remember or formulate something so generic. He complained about a bad review he got on yelp to everyone. It was so awkward. I thought he might tell us why his wife left him, as if we didn’t already have a clue. Now if you are going to do the Circle Line Cruise go ahead and check the Yelp reviews to make sure that you don’t get the guide everyone is complaining about. Best part of the cruise was passing by the Statue of Liberty. It’s so iconic and not as tall as I thought. We could see the line of tourists from our boat, which is why spending a whole day to go to the top wasn’t a part of the itinerary. “I can see it from here.” as my mom would say. 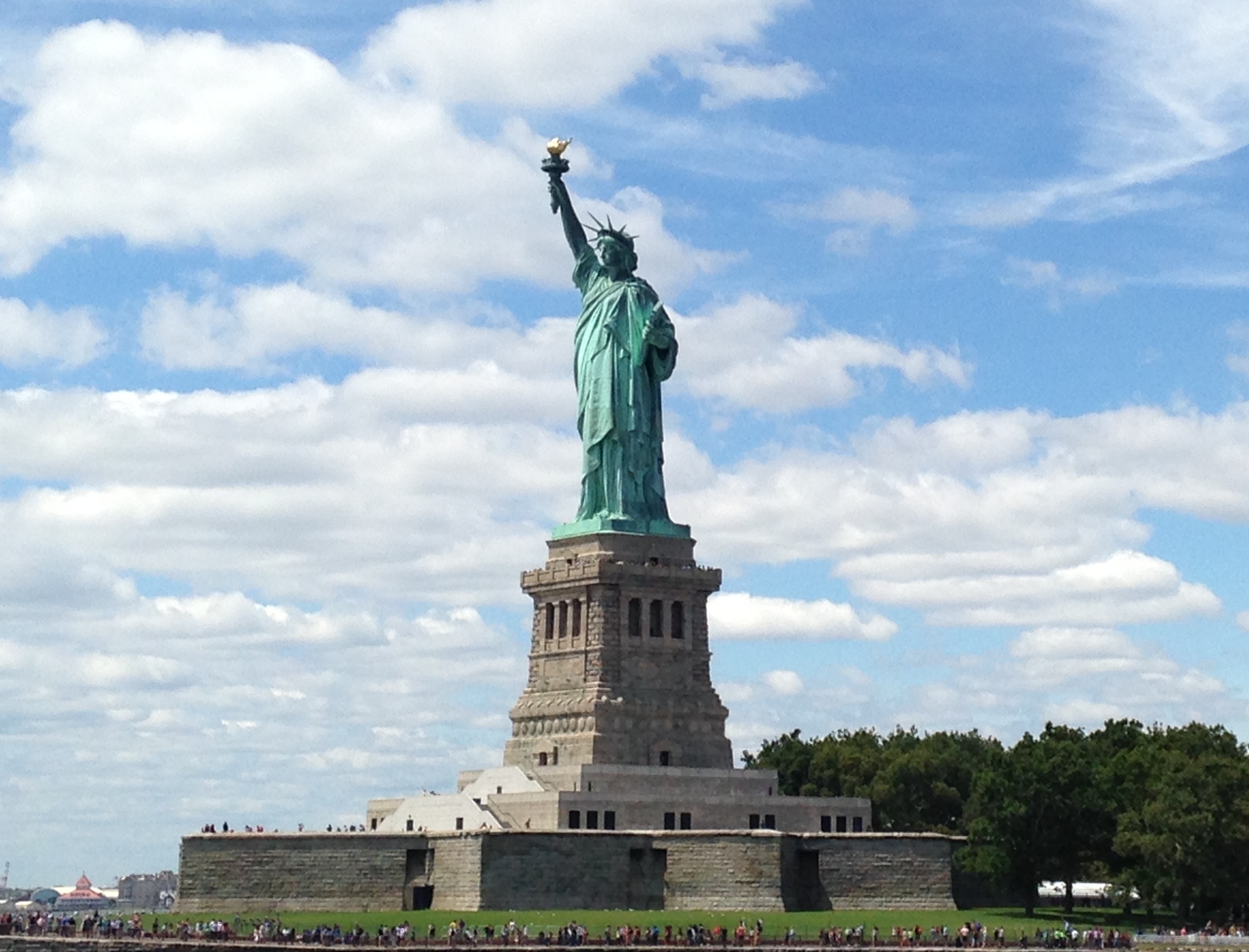 After the cruise we grabbed some ginormous pastrami sandwiches from, Carnegie’s, a famous sandwich shop that was recommended. My sis and her husband, Bobby, went elsewhere because we quickly became aware that the East Coast isn’t as dietary restriction friendly as us California folks. A couple of waiters thought that if something was whole wheat is was gluten-free. Amateurs.

After lunch, Gabe and I, went to the MOMA. It was free after 7pm on this particular Friday night and this was obviously no secret. When we got inside we had to fight our way to Van Gough’s, “Starry Night”. Why is it that most famous artworks are smaller than you think they are? As if it is grandiose because it is grand or huge. Nope. Yet I do appreciate seeing a favorite piece and having it be grand. For example, Gustav Klimt “The Kiss” is both grandiose and grand. I believe it is 6 feet tall. Which is probably my favorite artwork I’ve ever seen in person. Not just because of its size, but size does matter. 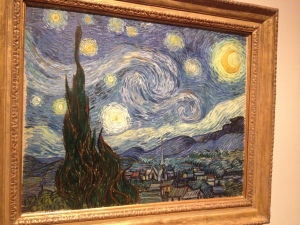 On the way back to our room that night we passed by the Empire State building. We noticed there wasn’t a line so we figured it might be a good time to go up. Since we weren’t going by the itinerary I called to see if anyone else wanted to join us. Nope. We got up to the top in 20 minutes. There are things in nature that create a feeling of awe: waterfalls, sunsets, puppies. Then there are things created by humans that give you the same feeling of wonder. This was not one of them. I’m kidding. It was so awful… in the original definition of the word. I don’t like to define romance by typical terms, but call me cliché this was romantic. 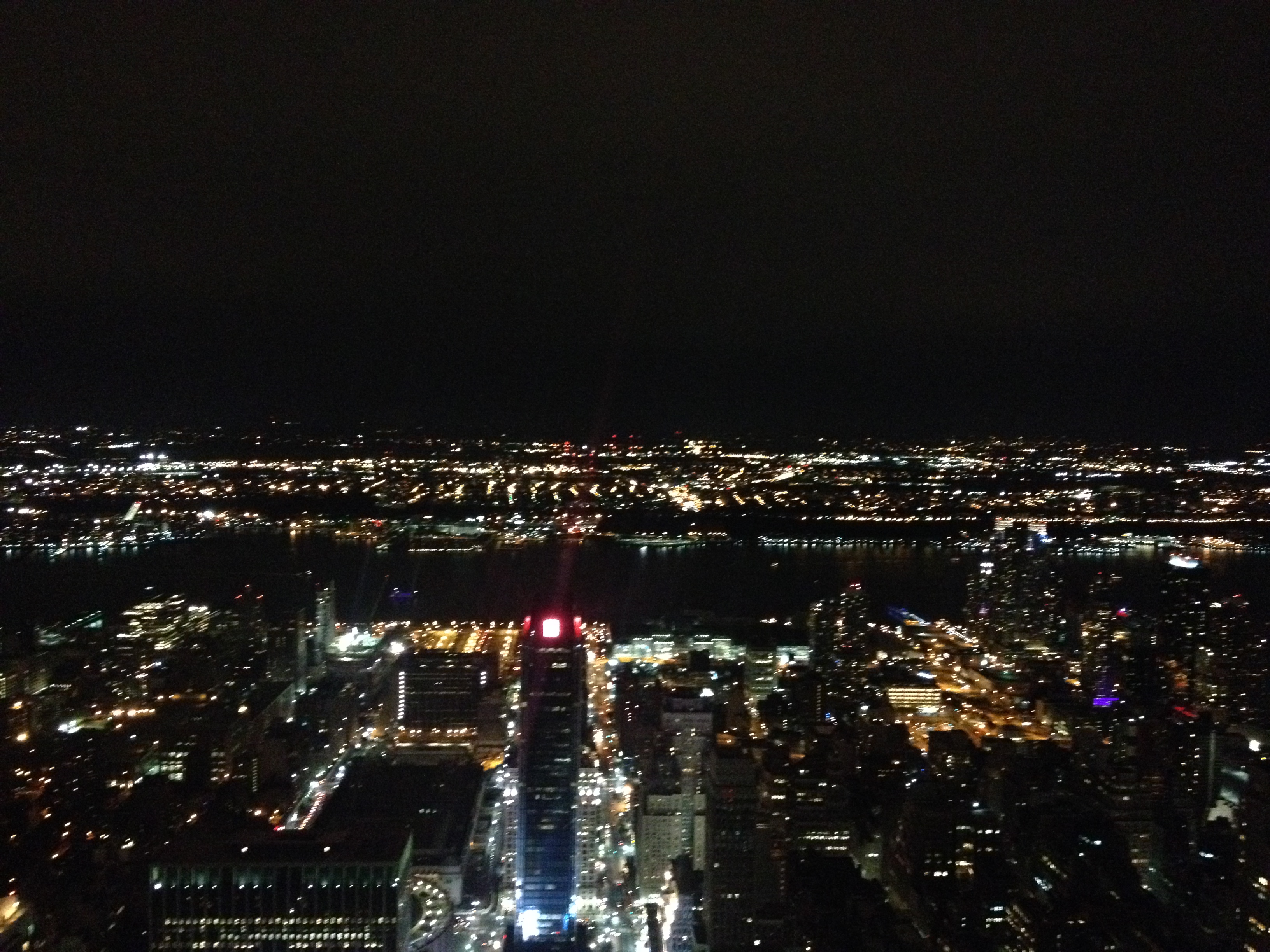 As we were making our loop around the top, Gabe pointed out a black hole in the city, “Why is it so dark right there?”. I took one glorious self-righteous pause before responding, “You mean Central Park?” I love how intellectual Gabe is, but when he asks a silly question I am much more delighted and entertained than I probably should be. Now I tend to have the opposite effect. I get the surprised look from saying something intelligent. Time is the 4th dimension. Boom. Lights out. Day 1 was over.

After being well rested we headed off to Brooklyn “early” in the morning. 10am. I don’t know what so great about the Brooklyn Bridge. It’s so old and wooden. Wait is that why? 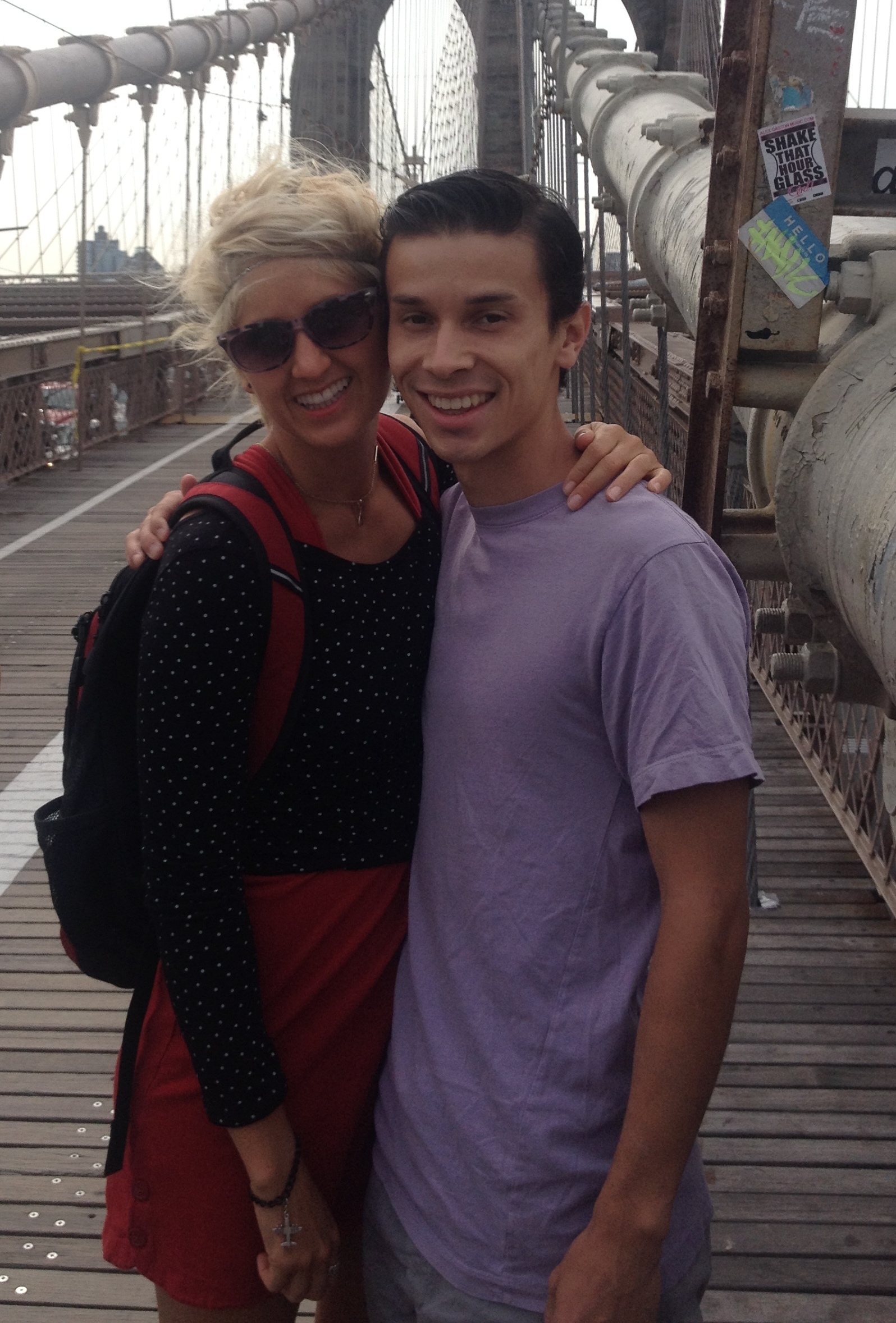 Well we walked across it like everyone else. After eating breakfast in Brooklyn Heights we all parted ways once again. Gabe and I went off to explore Williamsburg. As we were walking we noticed that we were getting lots of stares and everyone was dressed very modestly. Some people even crossed over to the other side of the street to avoid us. As if Cali swag was contagious. Pshhh you wish. Yep we were in Bushwick, but we didn’t know it. After walking around for 40 minutes I decided to ask a couple at the gas station which way we needed to go. We were way off. They were nice enough to offer a ride since they were heading that same way. Luckily, we took them up on it cause it took 20 minutes driving to get there. I don’t even know how we got that far off track. Well uhem Gabe was giving the directions. Williamsburg reminded me a lot of Oakland and Berkeley. It has a very young, hipster vibe boarding on obnoxious, but still really cool. There was an awesome food truck event called Smorgusburg. Pork belly tacos are amazing in case you get the chance. 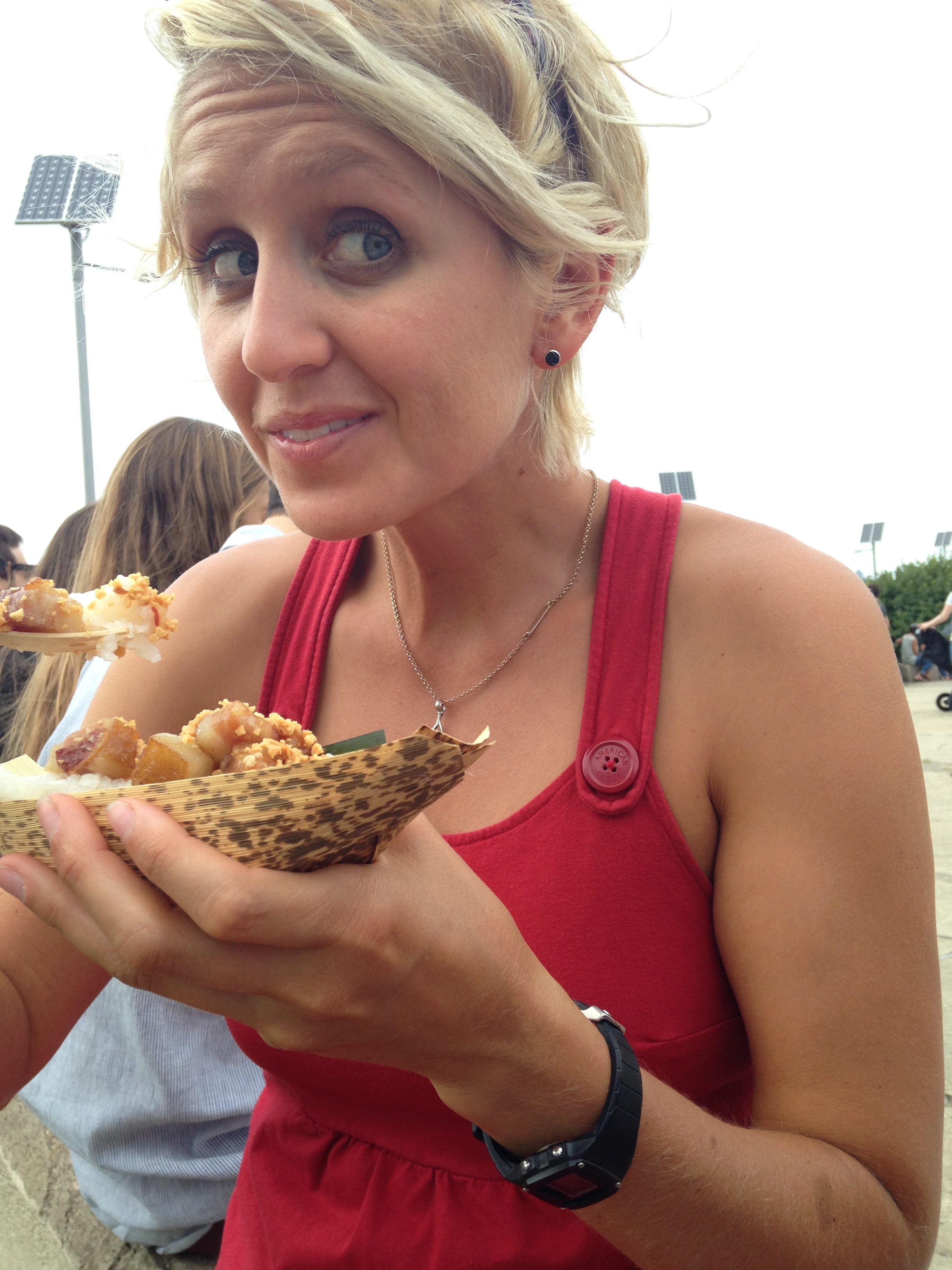 We then headed back to the room to get ready to see a Broadway show. Aladdin. Now I love everything Disney. All my ringtones are Disney. I have at least 3 Disney shirts. Don’t worry they are all off the shoulder faded hipster looking so it’s less dorky, except maybe the Hukana Matata one. But who cares. No worries right? For the rest of my days? Oh you know you finished the rest of that chorus. Anywho. The non-Disney lovers (soulless demons) in the group loved it. Maybe there is hope for them. The Genie was the best part of the play, even though he sang too much. Go see it if you can. 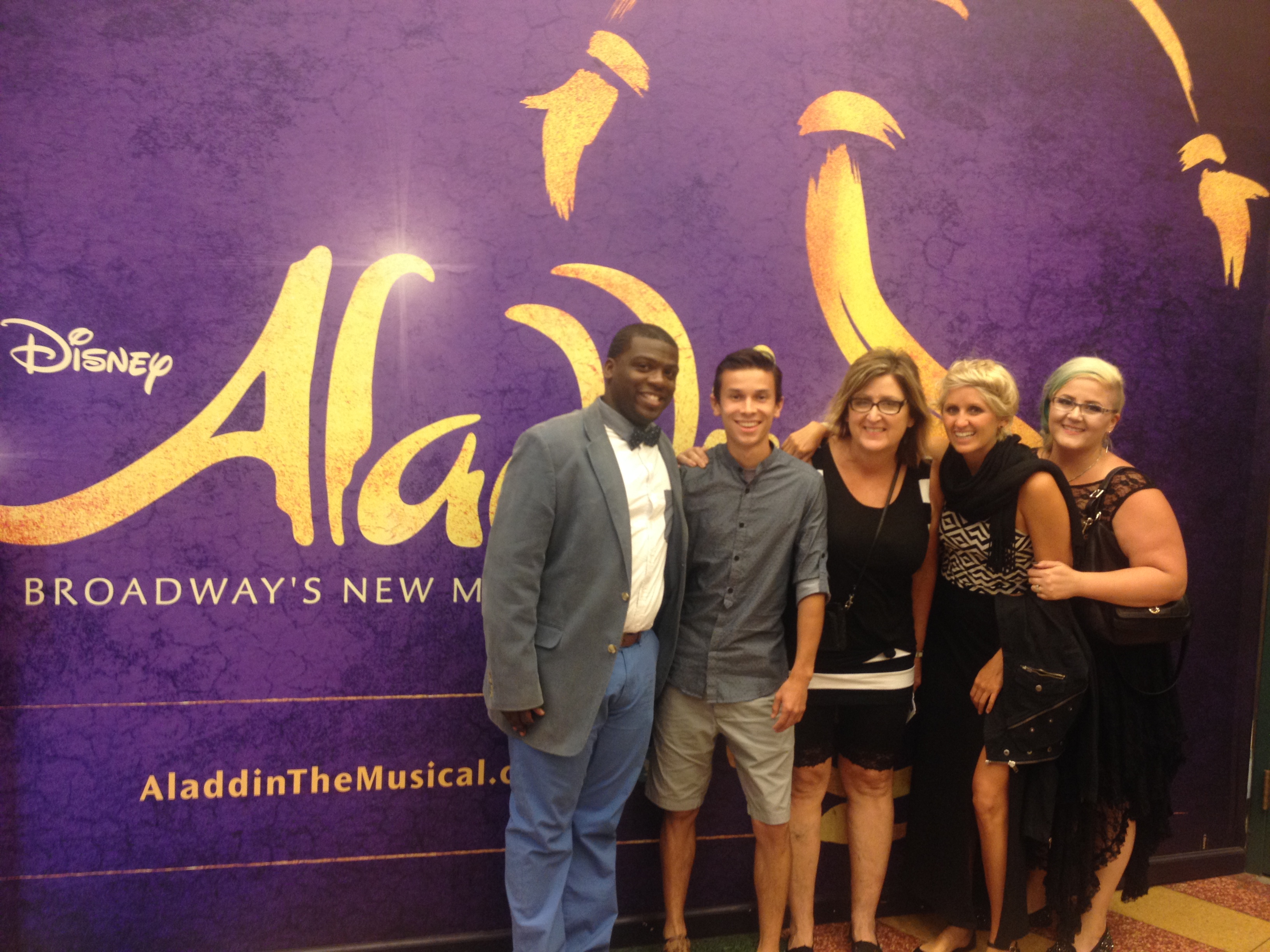 Afterwards we grabbed Junior’s cheesecake. It was on the itinerary. Worth it. Don’t go for anything crazy. Regular and triple berries. Thank goodness we walked everywhere. Day 2 complete.