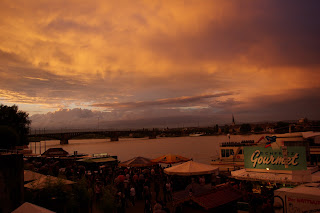 I arrived in Mainz on Wed. night with all my luggage packed for a year stay. I struggled to get off the bus to make it to the hotel when luckily a bunch of Americans that worked on the project I was documenting helped me carry my luggage to the hotel. So in the first 2 minutes of my arrival I already knew I was in the right place.

Well I guess I should start by stating why I was in Mainz. A team of Germans planted a church in Mainz, Germany and our team documented the kick off week of their church. The church is called KIA (Kirche In Action) and it is a part of Project Noah, which plans to plant churches along the Rhine river. So far Mainz is the first church planted in this project. To kick off KIA there was what was called, “First Supper”, a service that happened every night from Tue. till Sun. The evening event was held in a large tent set in the city center where anyone could come and eat for free, worship, listen to the sermon, and enjoy conversation with the witness teams. There was also a mission corp., Engedi, which sends over youth mission teams from the U.S. to help with the planning and preparation. These mission teams were spread throughout the city either giving “Jesus Treats” (cookies) to city offices, or picking up garbage in the swamp and around the city.

The church is made up of a mostly younger crowd with the average age around 22-26, including the pastor. People have committed 1 year or up to 5 years of their life to the KIA church and their dedication was inspiring. The KIA team, through funding and loans, was able to buy a run down hotel for their volunteers to live in. After the kick off KIA had their first service in the bar section of a movie theater. KIA was also trying to start a coffee shop where anyone can come and hang out, enjoy conversation, and fellowship.

Throughout the week it was amazing to see people coming from all areas into a tent to share food with people they’ve never met. There were many stories of people who came in and were overwhelmed with the love and compassion that they came back every night and even wanted to hang out after dinner.

When I arrived on this mission in Mainz it was the first time I had met my own team, Simone (boss), Steve (partner), both in 20s and from California. Small world. I started off disconnected and just doing my job. I used the camera as a way to distance myself from others in order to avoid conversation and interaction, but that didn’t last. After I interviewed the pastor (Philip) for the documentary, he then questioned me. He asked me if I was encouraged. It is amazing how pastors sometime can catch you off guard with their to the heart questions. After I caught my breath from the intensity of the question I thought, hmmmm… well I had tried to just do my job and not interact and realized that it was impossible. However, I was glad that I failed at my task. I responded to Philip, “yes I’m encouraged”. I was encouraged by the people involved in this mission. What these people were doing was amazing. What else was fantastic is that they were all so young with such big dreams, humble attitudes, and spiritual maturity.

Before I had arrived on Wed. I was nervous and apprehensive about volunteering for a non-profit that I knew nothing about. By the time I left Mainz I was convinced that this is where God wanted me to be.

Well, when we got to Buesingen, my new home, we had 4 videos that needed to be shot and edited for the National Youth Conference in Kiev, Ukraine. So in the past 3 days we have put out 14 hour days in order to finish. We leave for Kiev on July 31st and will be there for 3 weeks filming for the convention and mission trips.

So far that is a lot of info for only have arrived 10 days ago. I’ll keep you all posted.