Resolution… make this year better than last. This shouldn’t be too hard since last year was shit.

Now there are people that have it worse than I do so this is not a competition… well unless I thought I was gonna win, but I’m not… right?

I know I shouldn’t start the year being a downer so that’s why I’m starting this blog. I need to start being inspired. Take my life into my own hands. If I can complain it’s because I know the solution. Not true but it sounded good the first time I heard it. I don’t know the answer and I will still continue to complain. Even though I don’t fully comprehend how I’ll make this year better I am going to start taking steps to better myself. First thing, blog. Blog every day… well as much as I can. NO every day! Ok #2 I’m a photographer with a degree for goodness sakes so next thing is to start taking pictures… every day? So far this is doable right? I keep looking at the clock cause I have 48 minutes to finish this blog or I already fail my resolution. With the time in mind I’ll stop there. Damn I forgot the 2011 best of list. This shouldn’t take long.

Breathe. Only positive thoughts. Ok 2012 let’s do this!

January 1, 2012 and I have successfully gone through one day of the new year without breaking my resolutions. Blog done with 32 minutes to spare… 31.

Picture of the day: Roarrior the Catzilla reminding me that holidays are over. 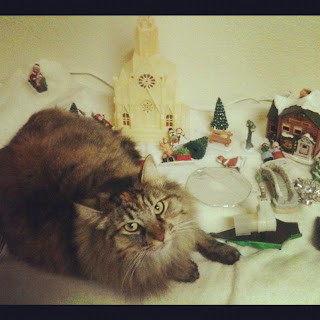 I only said a picture every day… never that it was going to be a great one… 29 min.