Lately I’ve been contemplating buying a video camera, more specifically a Canon 5D. My family keeps pressuring me to put my degree to work and make some films and honestly I should. Unfortunately, in order to film you need a camera.

So me and my dad went to our local camera shop where a very knowledgable guy gave me all the info I needed, well except how to afford what I want. For a Canon 5D the body alone is $3,000. What’s so special about this camera you might ask. Well since I’ve been educated let me tell you. The Canon 5D has become the standard for filmmakers. I mean Spielberg isn’t using one, but the directors of the show House are. What’s great about this SLR (single lens reflex) camera is that it not only takes pictures at 28 megapixels, but also HD video. With the add on lenses you also have control over your depth of field unlike a standard video camera.

However, there are 2 problems with this camera. One is that the internal microphone is useless. You have to buy an external mic to plug into it which aren’t cheap either. Second problem is with the autofocus. It doesn’t autofocus in record mode. So if you’re recording and your subject moves out of focus you have to focus them manually. This can get really tricky if you are shooting wildlife, sports, or documentaries. It is rumored that Canon is coming out with a new camera in a month or two and possibly the focus problem will be fixed.

I guess I’ll just wait for the new one that comes out the decade I can afford it. When I walked into the store I thought maybe $1,500 or the most $2,000 was what I had to save up for not $3,000 plus an extra $1,000 for some lenses and a microphone. Who is buying these? No wonder they are being used in the film industry because no average hobbiest could afford it. Including me.

This was a major blow to my potential savings and entrepreneurial efforts. I won’t give up though. eBay here I come. If you know someone who is burdened by the pressure of producing award winning films with their expensive camera then I’ll will carry their yoke. I’m also taking donation. Or if you want to hire me as a videographer I charge $3,100… in advance. Till then thank Jobs for iPhone. 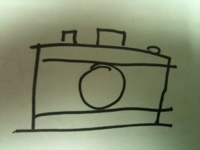 Out of Ordinary Saturday