My next adventure from Macedonia was to Bulgaria with a Missionary couple (I’ll call them Mr. and Mrs. M) and their 4 little girls. The girls were between the ages of 12 and 6 and act just like sisters so I was a little worried about being crammed into a van for a 7-hour drive to their house in Sophia, Bulgaria. However, the girls were very pleasant. While watching the girls interact I thought I used to be that young arguing with my sis about things like, “I wanna listen to Dinosaur Stomp cd… well I don’t. I want Sunshine Mix…. Mom she got to listen to her cd last time… no I didn’t…. mom… moooooooooom….” Then I thought, wait, me and my sis still do that now. I had to give credit to those girls for being missionary kids, and having to grow up in a country where they don’t quite fit in. Not that growing up in America guarantees that you will fit in.

As we crossed the Macedonia-Bulgaria border I saw men riding carriages carrying hay, an old women guiding her sheep down the road, and a tractor causing a road block. It was all so simple, yet so beautiful. Bulgaria looked very similar to Northern California with its long stretch of rolling hills and trees covering them with their autumn colors. 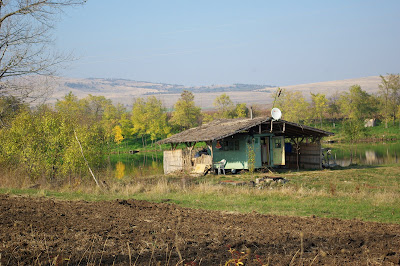 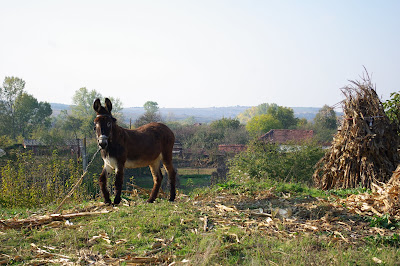 About 7 hours later we arrived at the missionaries’ house tired and hungry. I met Simone (my boss) there and we started to layout the week ahead and decide what we wanted to accomplish. There were a lot of people to interview at many different locations.

The next day we went to Stubel, a small village, to interview a woman who had started a church there. It was amazing to listen to her story. Most people told her starting a church in the village could not be done, but she continued to gather believers and form a church. The next person we interviewed was a pastor of a church in another town who had an interesting story as well. He told us that while his church was being established there was a man who lived near by that constantly complained about the church to the authorities and wanted it to be shut down. The authorities caused some problems for the church, but did not really have a good enough reason to intervene. Well the next week the man was gathering signatures from local residence to have the church shut down and while he was walking by the steps of the church he had a heart attack and died. It was no surprise that the church no longer faced any conflict from the town’s citizens. 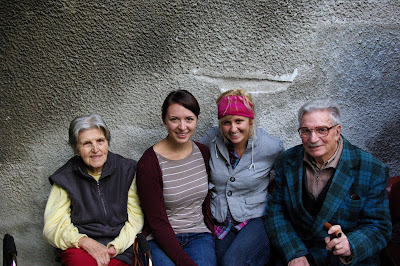 Me and Simone with a nice couple I randomly met when I was taking pictures near their home.

The next day we traveled to Vidrare to interview the principal of a school. The school was created for children in the local villages whose parents couldn’t afford for them to travel to school every week. The students live at the school during the week and go home on the weekend. The principal was having a hard time getting the children to behave. Then one of the Bulgaria missionaries intervened and started a bible study for the students. The children’s attitudes started to improve, so much that the parents noticed and then started their own bible study. When we arrived in a classroom all the students would stand to welcome us. I was incredibly impressed with how respectful and well behaved the students were. During the lunch break the younger children just latched on to Simone and I and wanted to play all day. They did not care that we could not speak the same language; they just wanted to feel loved. The children were amazing. Some were really shy; some were always posing for the camera, but most were smiling. It was unusual to see students without cell phones or ipods, but instead playing games and having a great time.

On the way home from Vidrare I noticed many families whose homes did not have much of a roof. Some houses looked like a Jenga structure that was only one block from crumbling. However, no matter how bleak these houses looked every time we passed someone they would always look up and smile. It made me feel so selfish and foolish for ever complaining about not having central cooling during the Redding summers or minor discomforts like that.

When I first arrived in Bulgaria it took a day to soak in the newness, and fight the vulnerable feeling inside that told me home is better. This was a feeling I get every time I travel. It usually takes a couple days of being immersed in the culture to get to the point where I do not what to leave. I was now at that point. I became so intrigued by Bulgaria that I wanted to learn more about the foreign land that I was in and the people that make it so unique to me. Time was going by so fast and I didn’t want to go “home”.

On the way back from our trip today Mrs. M started to talk about the orphanage where she worked. In the orphanage she works with the children to um… well just love them the way they should have been loved by their parents. As she described her job I couldn’t fathom doing what she does because of the heartbreak she endures every time she looks at the children’s face. I was not taken aback because the children are orphans as surprising as that sounds I am awestruck with what happens to the children at night when the lights go off. She told us that it is overt knowledge that the security guards of the orphanage are paid off to let men into the orphanage to rape the children. It is hard to even write this now let alone the feelings I had when I heard this. Mrs. M said that because of the corruption there is nothing that she can do. No one cares about orphans. I couldn’t and still can’t believe that this kind of evil is still so prevalent in the world today. Where are the authorities? This reminded me of the homeless boys in Ukraine. Now I know why those boys refuse to stay in the homes that the police try to stick them in. I would much rather be homeless and face the cold and starvation than be subjected to that kind of torture. I was filled with so much rage knowing that this can happen. I don’t know how she can have the strength to walk into that orphanage and try to convince those children that they are loved when the night before some disgusting evil “security” guard allowed them to be sexually abused. How can those children ever have a chance at a normal life or ever feeling of value? With all the missionaries we have and activists who are trying to change the world, I wondered what are they doing? How can they miss this? A main focus of the church is to bring God to people and convert people to Christianity, but I don’t think that was Jesus’ main goal. I think he would have cared more about saving the broken and battered children than planting more churches. I just don’t get it. What are we doing? What am I doing? I wish there was a way I could sneak into the orphanage and document the evil doings so I’d have evidence and those people would go to jail and get the same treatment or worse that they gave to those children. I didn’t and don’t like being filled with so much hate and anger, but they are so helpless and I feel helpless.

After I heard about these heartbreaking atrocities my heart and spirit felt heavy. Now every time I pray I think of those children and I become overwhelmed with sadness. I guess I always knew that there was evil in the world and children were mistreated like from those infomercials about adopt-a-child in Africa. You know the commercials that most hate to see and would rather change the channel than challenge their heart. While living in the California bubble I sheltered my thoughts from wandering far enough to think of all the suffering that occurs every day. Now that I know what goes on I can never go back to my blissful ignorance. These thoughts will stay with me forever.

I don’t even feel like continuing to write about the rest of the trip because I don’t want to take attention away from that experience. So I’ll end with I’ve been so impressed with the people I’ve met that have so little yet dedicate so much. This experience has stretched, humbled, and inspired me more than I could have ever imagined. Even though, my heart is heavier now that it ever has been I feel blessed to carry this burden of knowledge and an aching to impact this world the way it has impacted me.