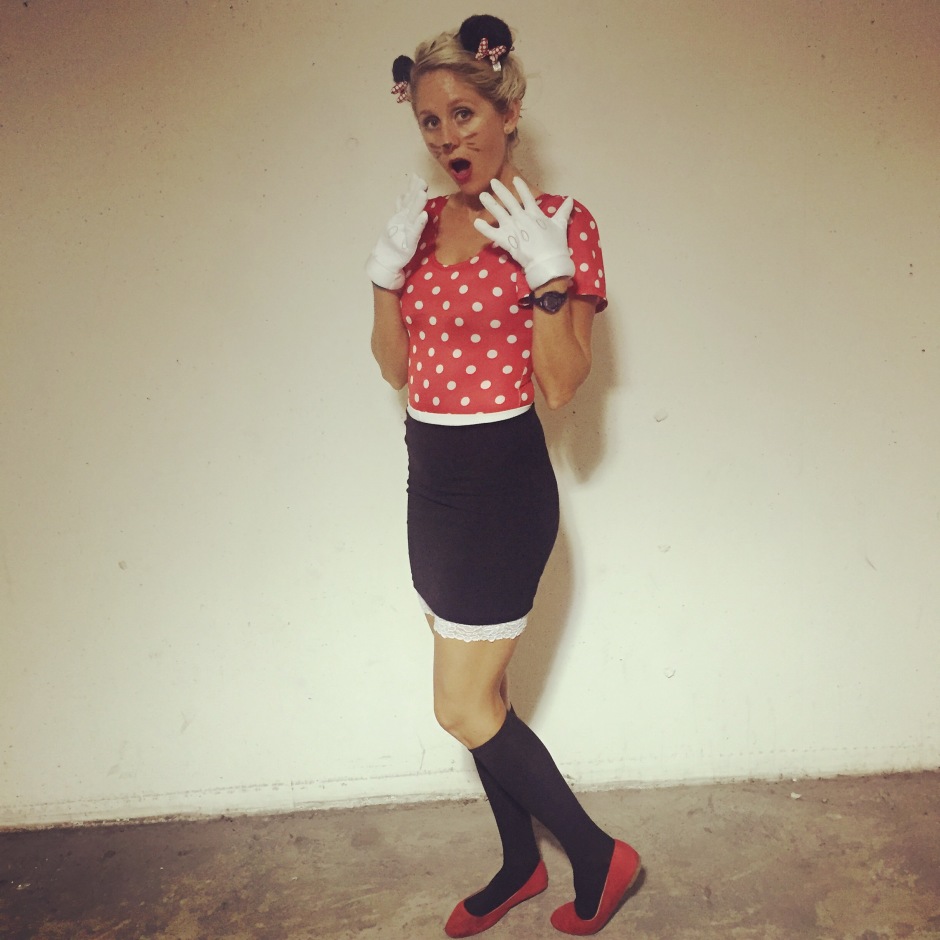 I love this holiday. I guess it’s not technically a holiday, but it should be. I didn’t celebrate it much as a kid. My mom made awesome costumes when I was little, but growing up being homeschooled out in the sticks made it impossible to trick or treat. I chose to home-school so don’t think we are the “live on the farm shelter my children” type. I’m more like the awkward 9 year old that told my parents that school was a waste of time and they begrudgingly said they would try to home school me. Back to Halloween, when I was about 12 years old a couple of my friends (yes home schoolers have friends) decided to dress up as Barbie’s. Then one friend changed her mind and wanted to by a gypsy. Four Barbie’s and a Gypsy. Great band name, right? Disregard that when she showed up we realized she meant Egyptian. Anywho. We left too late and all the candy was gone. Damn gypsy, I mean Egyptian. We got a couple of people that said we were too old to trick or treat. So witches do exist. Ok all that to say that I don’t know why I love Halloween.

I have a Halloween checklist I like to go through every year.
1. Being Scared: First up was to watch the 3rd season of American Horror Story. I’m a little behind, but my spirit can only take one season a year. Also, Scream Queens is a fun horror show. I love being started and I will jump if you tap me on the shoulder. I don’t know if this is why I like horror or a result of watching too much of it. This year I went to Frightfest with my boyfriend’s mom. She was the only person I knew that was willing to go on roller coaster and haunted houses. Double the screams. It was awesome. They have zombies that walk around the park at night and try to scare you. I don’t know why people don’t love this.
2. Pumpkins: Next on the Halloween list was carving pumpkins. Side note: the bay area does not have any pumpkin patches. Charging $20 for a pumpkin sitting on a hay bale in a parking lot is heresy. Burn them at the stake! We ended up getting our pumpkins at Trader Joe’s, but they were a little small. Do you recognize them? Gabe’s was Gears of War, which is a video game. 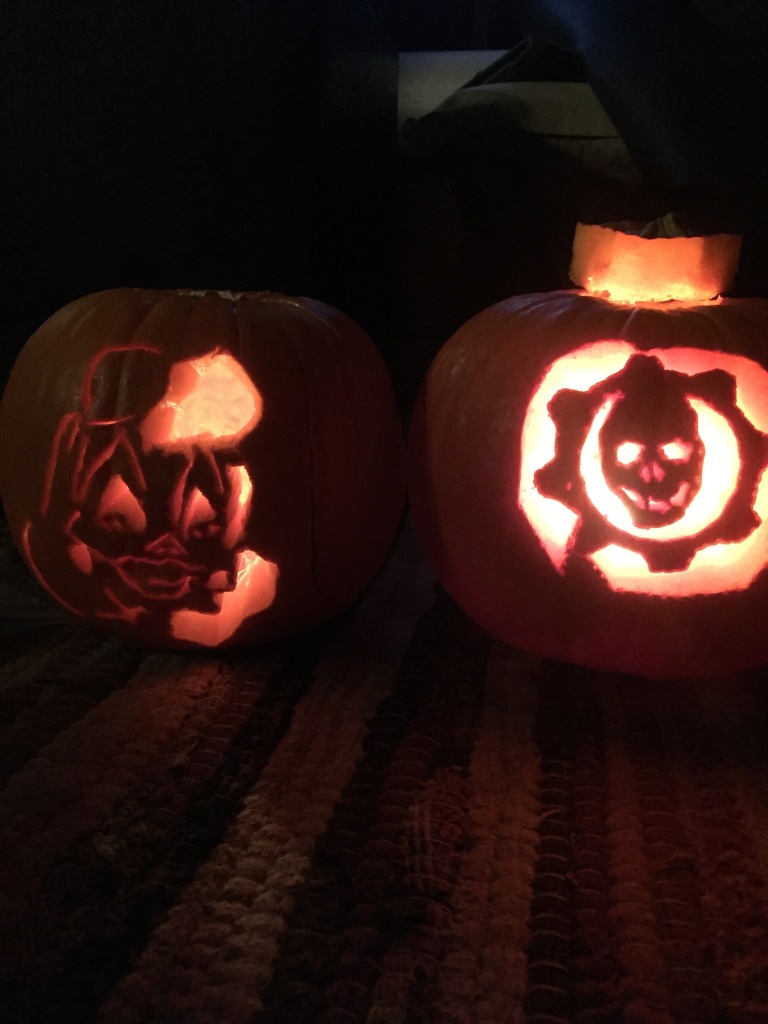 Mine is… well. Maybe this next pic will help. I added some more characters to the scene. 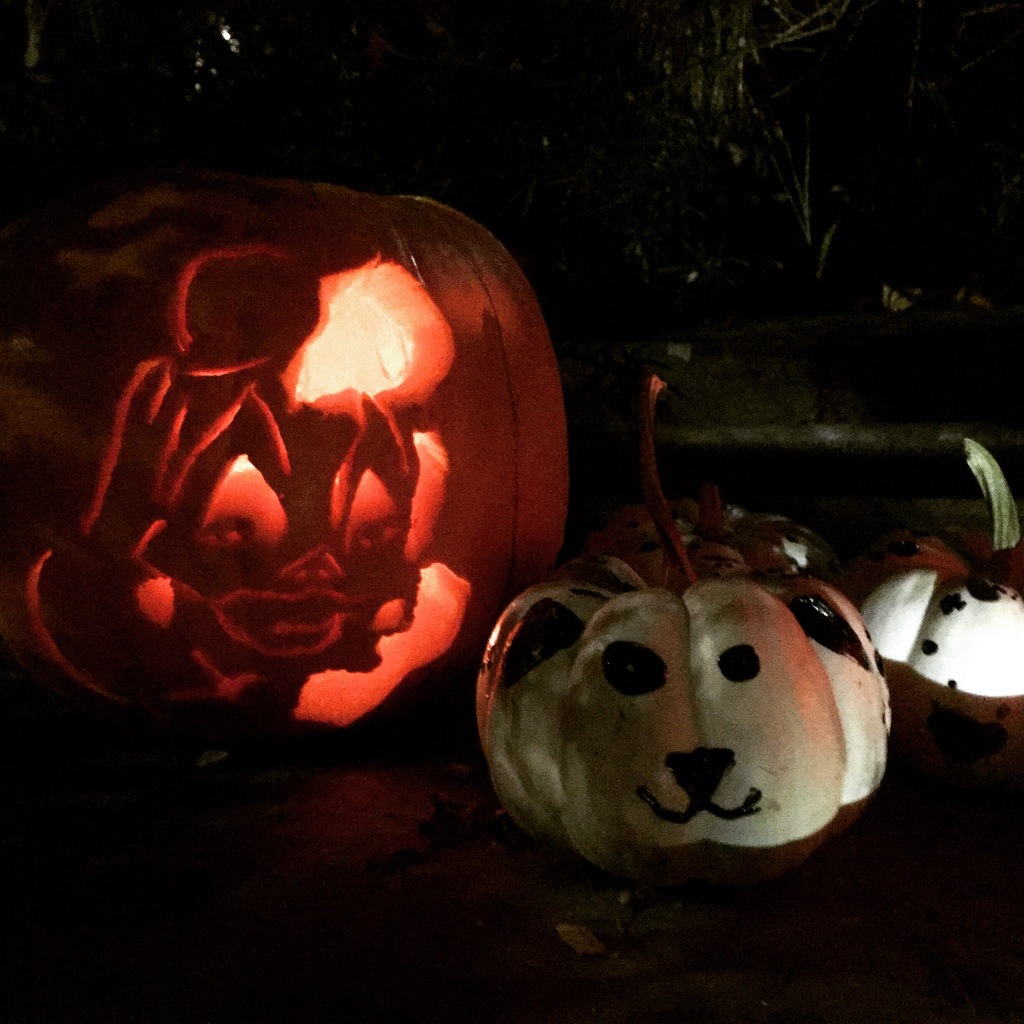 Maybe not though. Cruella De’Vil. I was a little disappointed about my carving this year so naturally I did another one. 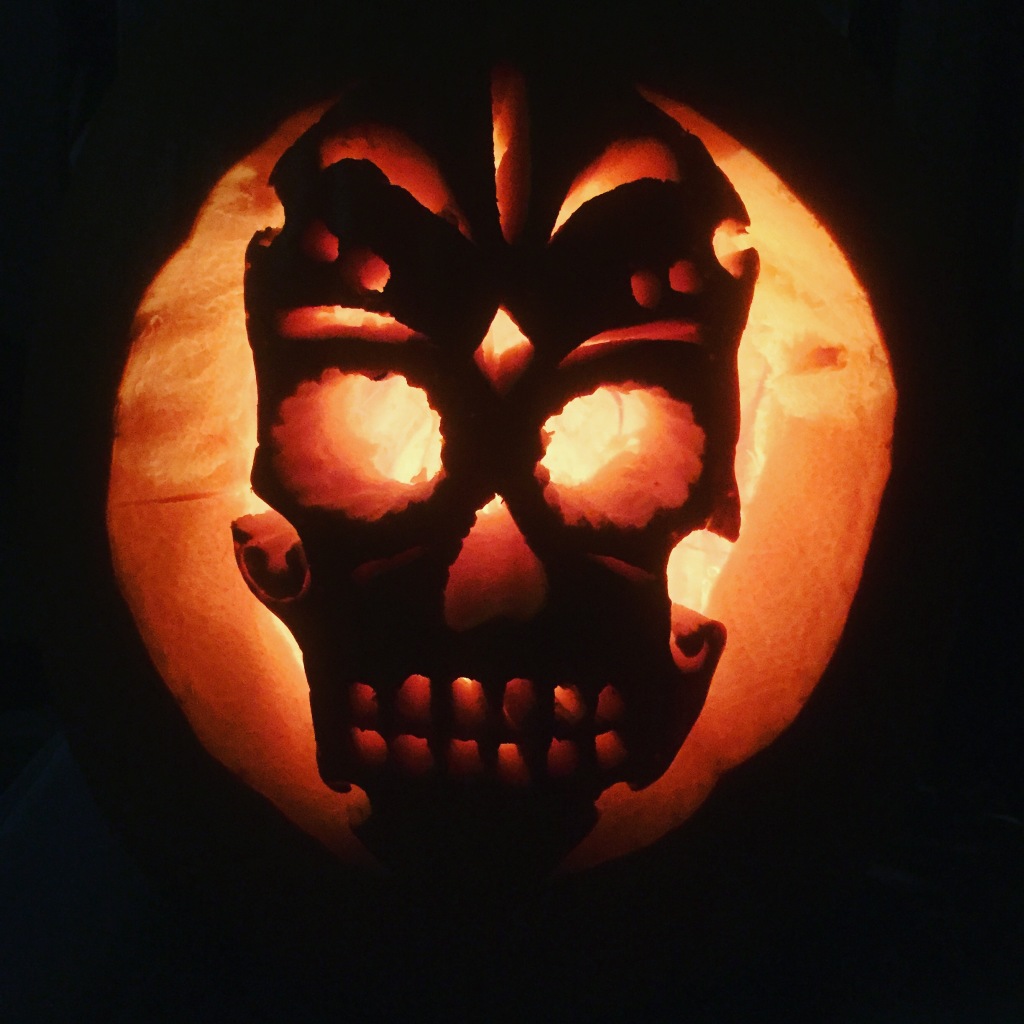 It was a good thing to cause our other pumpkins got smashed the night before Halloween by some crazy guy. Neighbors said the cops were called. I wish I could crush is candy skull.

3. Costumes: This has a blog post all on its own. I always have more costumes than places to go. I really should work on this whole making friends thing, but who needs friends when I had so much fun making these mini rice crispy pumpkins on my Friday night before Halloween. It was for the kids I coach. I promise. It’s hard to find costumes that you can coach and play tennis in. 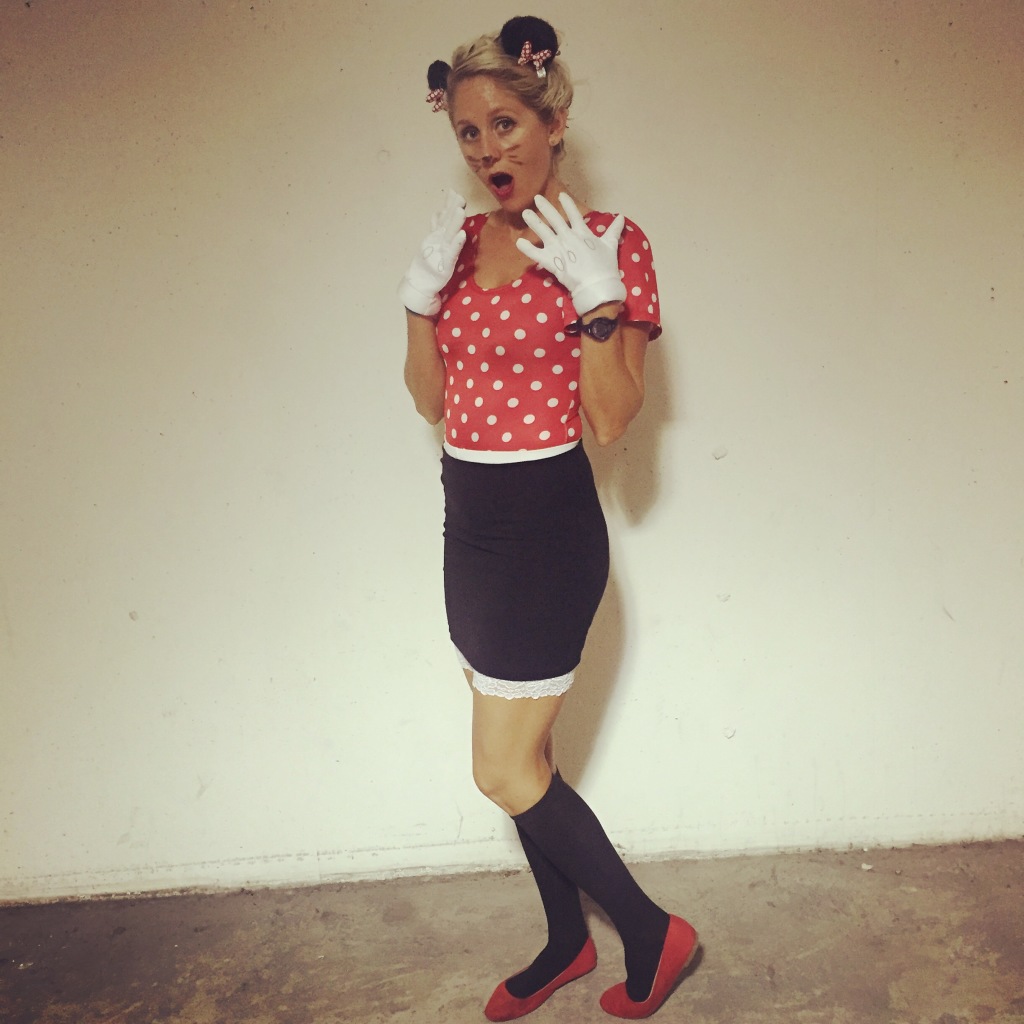 But not hard enough. After work my mom came into town and we went shopping. Yep in my costume. Luckily, by 3pm there were other Halloween fanatics that came out of hiding. We got back to my apartment just in time to catch the end of trick or treaters. Really just treaters. Kids just don’t have to work for anything anymore. Now this was my first time having trick or treaters so I’m not exactly an expert, but since when is it acceptable for parents to bring their own bag to get filled with candy? Twelve was too old when I went, but 43 is ok? Really? Can’t you just buy your own bag of candy? Anyone else have this happen? Bunch of basic witches. 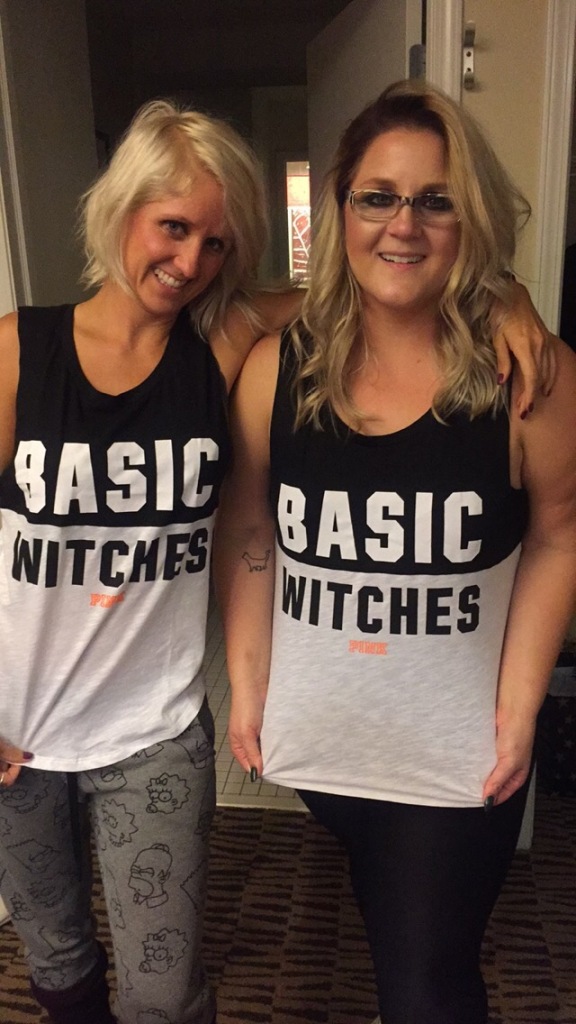 My sister and I.
Next year I’m gonna have my Rufferee trained to growl when I parent wants candy. Oh you want some candy old lady? Well come get it out of my dogs mouth. After the kiddies left I transitioned to my evening costume. No it wasn’t promiscuous. I just knew kids wouldn’t get it and I long to be understood by children. 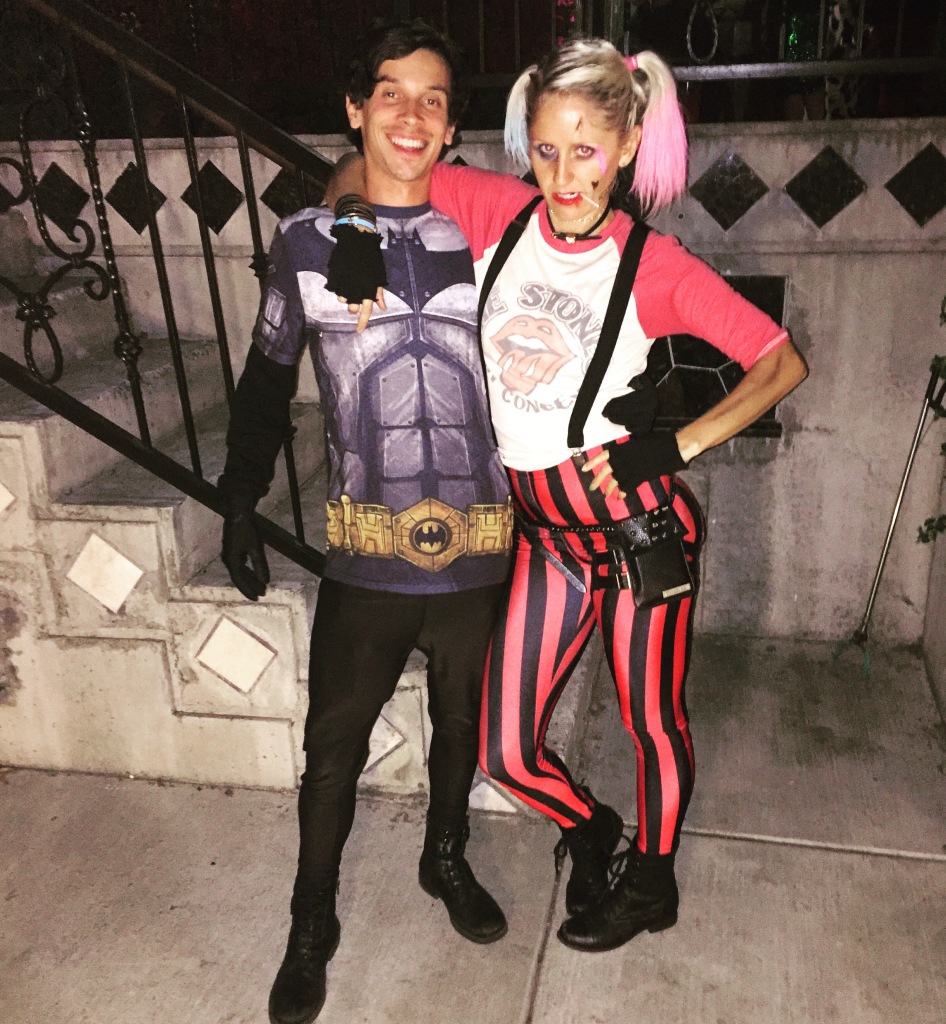 4. Party: Batman and I (Harley Quinn) then headed to a party. I do have some friends. Now this was my kinda party. Pumpkin bourbon punch with dry ice fog coming out of it, bobbing for apples and alcohol bottles, themed playlist, spooky decor, bloody cake with a knife sticking out of it. It was a Pinterest Halloween dream. My friends also had awesome costumes. It so much better to be creative than just buy something at Spirit City, even if you’re going as the year’s most popular character. By the way,I didn’t see any other Harley Quinn’s, but did see a lot of Oakland’s politically correct social activist vegan scenesters… If you don’t believe in the overly commercialized tradition with its sexist costumes and promoting child obesity then stay inside and watch a documentary about making culture appropriate dream catchers out of your armpit hair. I kid. I agree that those things are all unfortunate, but it’s not Halloween’s fault or Christmas or Valentine’s Day. Besides San Francisco has become pretty tame over the years. I think they lowered their freak flag to half mast. Well I’ll raise it a little for one night.